Looking for a Video Stabilizer?

I’m pretty sure we’ve all filmed our fair share of shaky smartphone videos despite trying hard to minimise vibrations from our hands. Even with in-built optical image stabilisations found in most flagship smartphones today (e.g. Apple iPhone 6 Plus, Samsung Galaxy S6), most of us still struggle to shoot satisfying handheld videos with these devices.

Well, if you’re eager to produce some awesome, kickass videos (especially for the vlogger/filmmaker wannabes), getting a camera stabilizer would probably be the first step to take. There are tons of stabilizers out there to choose from – so many that it gets a little too confusing for a first-timer. What’s more, prices for the renowned brands are way beyond the budget of many – case in point: a motorised gimbal from DJI can cost as much as a smartphone itself!

We were keen on finding an affordable stabilisation solution for our GoPro Hero 5 and/or our smartphones for future content creation. After searching through the sea of gimbals, the GOOD NEWS IS: we finally FOUND ONE.

Priced at just S$199, the Zhiyun Smooth-Q is definitely one of the most value-for-money gimbals available in the market! Despite the low price, we were surprised to find that the gimbal has full 3-axis stabilisation and also looked pretty solid and fancy! And so I headed down to the 7DayDeal* shop and bought it right off the shelf. (Separate add-on: GoPro mounting plate @ S$39)

The Smooth-Q comes in a nice rectangular box. Inside it lies a mini guitar-shaped (silver) casing that keeps the gimbal well protected, which makes it very portable and travel-friendly. Definitely a plus point there! It even comes with a strap that is hooked on the casing for the added convenience.

What’s in the Box?

Luckily for those that are new to gimbals, the Smooth-Q isn’t that hard to handle at all. The instruction manual (available in English) was easy to understand, and I highly recommend new users to browse through and be aware of the dos’ and don’ts before usage.

For the setup, slotting my iPhone 6S was pretty straightforward, followed by some slight adjustments to the horizontal knob (VERY important step) to balance the smartphone. Once it’s stable, hit the red button and the gimbal *magically* stabilizes the phone in an upright position (landscape view) – how COOL is that! With its beautifully designed ergonomic grip, manoeuvring the Smooth-Q seems rather intuitive for someone who hasn’t used a gimbal before.

Overall, the Smooth-Q performs quite a good job in keeping the phone stabilised, and all 3-axis can be controlled manually using the circular-shaped joystick.

CHECK OUT our short production that was filmed using the iPhone 6S (see below):

Not so cool points:

Compatibility wise, the gimbal can be fitted with most smartphones (see bottom of page for list), but question is: Does the gimbal differ in performance based on size and weight of the device attached?

To find out, we put three devices to the test – iPhone 6s, iPhone 6 Plus and the GoPro Hero 5.

The iPhone 6s is the lightest amongst the lot, and its relatively smaller frame makes it the easiest to control out of the three. On the other hand, the iPhone 6 Plus weighs 49g heavier and the rotation of the vertical axis is limited by the huge size of the phone. For the GoPro, a metallic plate has to be attached together to act as a counterweight for the GoPro, which makes the whole gimbal quite heavy. Even after adjusting the horizontal arm of the Smooth-Q to its maximum length, the GoPro does not balance well before powering the gimbal. Surprisingly, the Smooth-Q was able to handle the weight of the whole attachment, but one possible downside was the draining of the battery at a faster rate.

Jian Yang did a 10 km run at Macritchie Reservoir with the GoPro Hero 5 attached to the Smooth-Q (with the mounting plate). Here are his thoughts:

“Despite the ergonomic grip, the entire set-up felt a tad cumbersome for trail running. This is partially due to all-metal mounting plate for the Hero 5, which adds significant weight to the system and makes it top-heavy. The system would otherwise balance perfectly in the hand if a smartphone is mounted.
Performance wise, the gimbal’s gyroscope and motors functioned almost flawlessly on the trail. I say almost, because, while the system counteracted the bobbing motion without breaking a sweat, there were occasions where it would lose its directional tracking, especially after a violent swerve or swinging motion. Thankfully, these situations were few and far between. Overall, it functioned as advertised and I would definitely recommend it to runners or hikers who wish to document their journeys.” 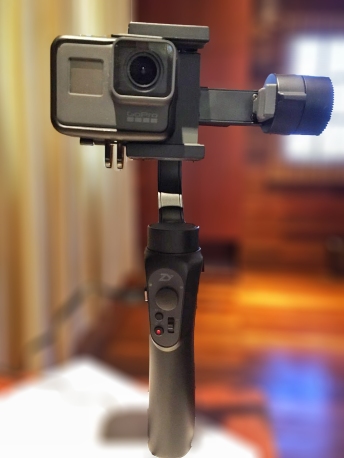 One workaround to the heavy mounted plate would be to swop it with the plastic protective cover case for the GoPro and simply clamp the GoPro directly to the Smooth-Q (see image above). This reduces the weight of the GoPro significantly and I was rather surprised that it functions as well as compared to the smartphone attached. The grip on the GoPro is decent, but it would be recommended to tie it down to the gimbal with a string in case it falls off. One downside to this is the half visible screen of the GoPro, but thankfully, its functions can be controlled using voice commands.

Overall, the Zhiyun Smooth-Q really packs a punch, and I would say its the perfect motorised gimbal for those who want to capture a professional/cinematic video as well as vloggers at a relatively low investment.

Compatibility (as per stated):