While 3km doesn’t sound like much to most, it is certainly rather daunting in the context of open-water swimming. To put the distance into perspective, 3km is 60 laps of an Olympic-sized swimming pool. The South China Sea is, however, nothing like a swimming pool – the strong currents and negligible visibility are huge challenges to even experienced swimmers.

We had two aims for taking part in this race:

Since I didn’t have my own goggles with me, I used the one provided in the race pack. Bad choice, though I didn’t really have a choice. The bridge of the goggles was rigid, which made it impossible for the goggles to conform to my face – not exactly something you would want to wear for a long swim. My advice: use equipment that you’ve always been training with.

Aside from the timing chip that we had to secure around our own ankle, the race pack contained a $5 Speedo voucher, a pair of goggles, a race booklet, a towel, and a swimming cap. Not bad, considering we only paid $37.50 per person for this event. We had to tattoo our personal race numbers and a nicely-designed event logo on our left arms prior to race registration. 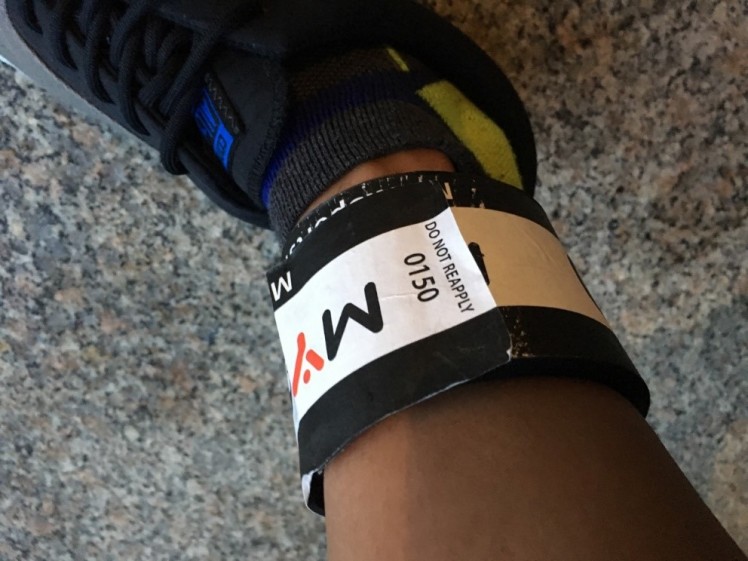 Unlike biathlons and triathlons which are flagged off on land, this event used a “deep water start”. This means that we were packed with over 50 others in a small starting pen, putting us just inches away from one another. At the sound of the horn, I was slapped in the front, left and right by kicks and splashes from the other swimmers, and I tried so hard to keep close to the pack less I kicked someone in the face. The 3 km participants had to do 2 laps of the 1.5km rectangular-shaped course, which was marked by 6 coloured buoys (end markers were yellow while middle markers were orange). Honestly, they were pretty much useless as they weren’t noticeable amidst the waves. It would have benefitted us tremendously if the buoys were bigger and taller.

The first leg of the swim was not as pleasant as I had hoped. I had to brush off not one, but two thick branches from my face as I surged through the random leaves and dirt that was, for want of a better word, uninviting. As usual, the salty sea water caused a stinging sensation to my nose and mouth just a few hundred metres into the race, but that was expected due to past experiences. Jian Yang said he also felt like he got stung by unknown stuff/substances/creatures along the way. The sheer number of swimmers in my wave was beneficial to me in a sense that I couldn’t lose my way. Besides, I was pressured to keep up with the pack – I felt the intensity radiating from the swimmers around me, some of whom were much older and more experienced than me.

As I bobbed through the waves, I could feel myself getting swept in an irregular zig-zag motion – the waves were constantly knocking me off my desired heading. The waters were just as I had imagined – a deep, miserable hue of green; it was hard to believe that any lifeform existed beneath me.

We were required to run up to shore to cross a timing checkpoint after completing the first lap, similar to a canoeing marathon’s “portage”. Thankfully, a hydration point was provided – I was totally in a daze and I needed that cup of water to quench my thirst. Just right before I entered the water for the second lap, I missed my footing and scraped the skin on my feet. It hurt for a while and I was slightly bothered by the stinging sensation, but heck, I decided to just carry on.

The second half was a lot less congested, and I could focus on my strokes and work on my efficiency. I felt the adrenaline coursing throughout my body up every time I approached the next buoy, right up to the last turn where I increased my pace with each stroke. With the shoreline in sight, I mustered all my energy and sprinted to the finish.

As I crossed the timing gantry and took off my goggles, I felt a sense of euphoria rushing through me. To my surprise, I was greeted with the sight of Yip and Wilson who finished a couple of minutes before me. Jingyao finished a few minutes later as he had started in the fourth wave.

I’m really glad that 4 of us (Yip, Jing Yao, Wilson and I) were able to complete the open water race together, as I wouldn’t have had the motivation to do it myself. I guess it is during races like this that we get to celebrate incredible achievements with an exceptional group of sports friends. Just the way I like it 🙂

Overall, it was a great experience. As crazy as it sounds, I’m actually looking forward to competing in our next event, the Singapore Aquathlon (1.5km swim + 10km run). Hopefully, these will all culminate in the full Ironman. Someday. 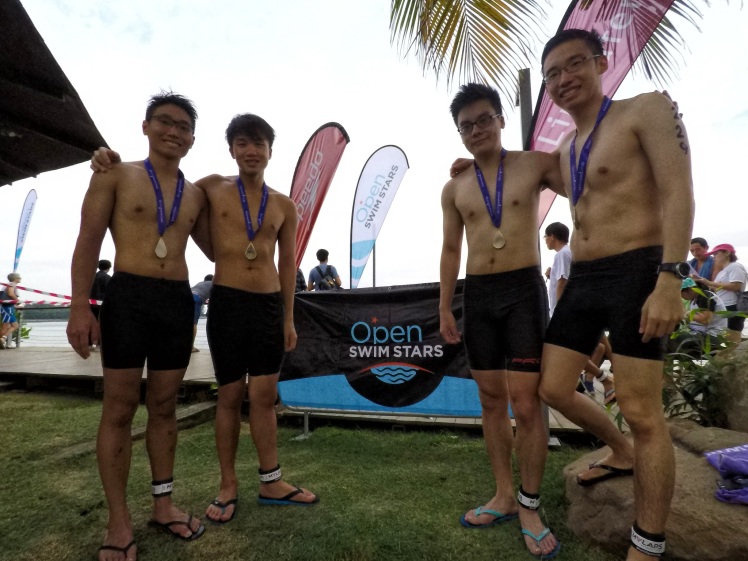